IFR from KSNA to KCRQ to shoot the ILS RWY 24 approach.

For pistons, our filed route reads V23 OCN. V23 is a low altitude airway (a Victor airway, hence the ‘V’ code) running from the Seal Beach (SLI) VOR to the Oceanside (OCN) VOR. These airways form the backbone of the low altitude enroute structure in the National Airspace System. 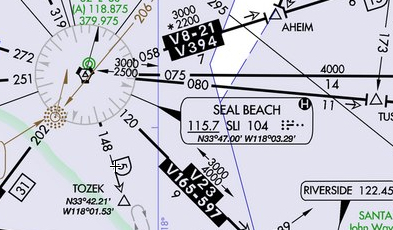 V23 runs southeast out of SLI along the 120 radial, all the way to OCN, and then continuing to the southeast.

In the real world, you would be required to have current low-enroute charts to fly IFR. These charts depict the airways, intersections, published holds, minimum enroute altitudes, and other information needed to safely fly IFR. You can access an interactive version of the required low-enroute chart at skyvector.com.

Note: This flight doesn’t go as planned due to lower than expected weather at the destination. Pilots are not expected to go missed at KCRQ, this is included for educational purposes only.

Swap to ground for taxi…

Reaching a safe altitude, we turn to hdg 175 and are told to change frequency.

We fly the 150 heading until intercepting the SLI R-120 outbound, which represents V23. Approaching OCN we’re sent to the next departure controller

As we’re fairly close to our arrival airport, it’s prudent to advise the controller that we have the weather, so he doesn’t have to give it to us

CRQ_TWR: Piper 2KT, taxi to the ramp, remain this frequency