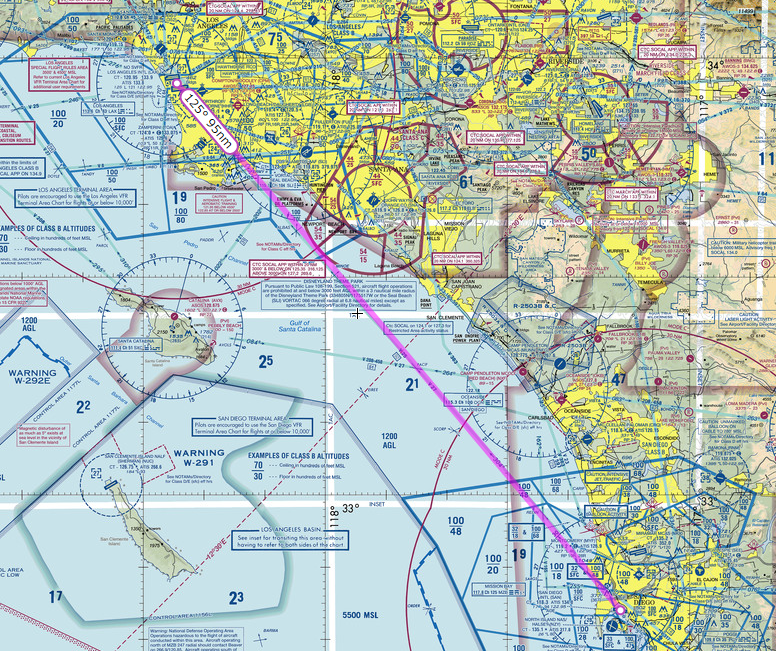 Tip #1: Be aware that once you exit Class Bravo airspace, you cannot re-enter it without obtaining another clearance. This is vitally important to understand when departing LAX as you’re likely to exit the Class Bravo shelf to the southeast, only to encounter another one later on if you continue to climb.

Tip #2: Be aware that you may not be granted immediate clearance into Class Bravo airspace during the arrival. While you will ultimately need a Bravo clearance to enter the surface-based Bravo immediately surrounding an airport, piston aircraft are often kept below the Bravo shelves prior to that point. Have a plan as to how you’ll navigate the airspace if you don’t have a Bravo clearance for the outer shelves. San Diego’s Bravo airspace is creatively designed such that the airspace from 3200ft to 6800ft (non-inclusive) is NOT part of the Bravo. Plan accordingly.

Undoubtedly, you’re aware of this by now, but Class B airspace is the most restrictive airspace that VFR aircraft has access to and is located around the busiest airports in the country.

Departing a Class B Airport

Departing a Class B airport follows the general flow of departing a Class C airport. First you will contact Clearance Delivery in order to obtain a Class Bravo clearance and departure instructions.

You will want to tell Clearance Delivery your aircraft type, cruise altitude, destination, and ATIS code. If you don’t have a specific destination you can provide a general direction of departure. Additionally if you desire flight following once clear of the Class B airspace you should advise clearance delivery in your initial call.

Clearance Delivery will provide initial departure instructions, a departure frequency, and a transponder code. Again, this bears a striking resemblance to a Class C Departure, does it not?

When ready to taxi call ground and provide your location on the airport. Ground will provide taxi instructions.

Departure will provide Class B services until you are clear of the Class B airspace. At this time you will either be instructed to squawk VFR and that a frequency change is approved, or provide flight following services (if previously requested).

Arriving at a Class B Airport

Arriving at a Class B airport is simply the reverse of departing. Around 40NM from the airport and prior to entering Class B airspace contact approach control on the frequency listed on your VFR chart.

Aircraft that are receiving flight following will automatically be provided Class B services once they enter Class B airspace. No specific action is required by the pilot to initiate these services. Once again make sure you are given a Class B clearance prior to entering the airspace.

Previous ratings have reviewed flight following services. Below is an example of the radio transmissions involved in VFR departures and arrivals to Class B airports.

Note, your departure instructions will be quite different if you haven’t requested flight following. They will instead advise you to make a left turn at the shoreline without a departure frequency, after which tower will drop you like a Potato En Fuego.

When ready to taxi

When ready for departure:

At this time you can resume your own navigation and climb to your planned cruise altitude.

When 10NM From KSAN expect approach to hand you off to tower.

When on midfield right downwind:

After switching to ground frequency.