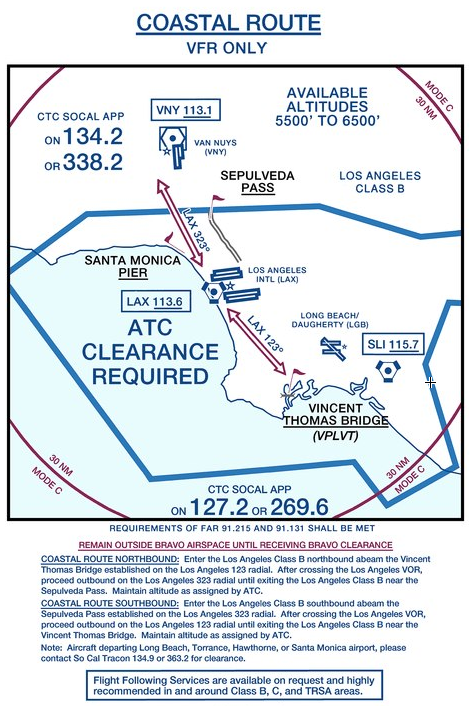 Class B airspace is the most restrictive airspace that VFR aircraft has access to and is located around the busiest airports in the country.

Since VFR transitions go through Class B airspace, they require you to be in contact with ATC and to obtain a clearance. Note that unlike a VFR flyway, a transition consists of a very specific route to fly and altitude to maintain.

Normally once established on a VFR transition you will not be able to “leave” the transition early, you will need to fly the entire transition before resuming your planned flight.

The Coastal Route transition graphic is included in the rating, but you can reference the LAX TAC to review the other routes for future flights through the Bravo.

While operating within Class B airspace all aircraft are provided Class B services by the local approach control.

Class B services consist of traffic advisories, sequencing into the Class B airport, and separation between VFR and IFR aircraft (and certain larger VFR aircraft) operating in the airspace. All aircraft are automatically provided this service. Unlike with Class C airspace generally you cannot refuse Class B services.

In order to request a VFR transition you should contact the frequency listed for the transition on the VFR terminal chart.

When calling ATC state your callsign, aircraft type, location, altitude, and transition you are requesting.

ATC will provide a squawk code and once radar identified provide you a clearance through the Class B airspace via the requested transition.

Note that in some cases ATC will not be able to accommodate this request, in this case you must remain clear of the airspace and find an alternate way to your destination (consider a VFR flyway).

Class Delta departures and Class Charlie arrivals, and flight following has been reviewed in other ratings. Here is an example of a request for the Coastal Route for an aircraft which is already radar identified (ie, is receiving flight following):

Socal: “N123AB, Cleared into LAX Class Bravo airspace, proceed via the Coastal Route, maintain VFR at 5,500 while in the Bravo.”

ATC is required to inform aircraft when they depart Class Bravo airspace. So, towards the end of the route, expect to hear: