CAT-06 Flight: Class D to Class D with Flight Following From the Start

Conduct a flight from Bakersfield Meadows Field (KBFL) to Mojave Airport (KMHV) and obtain VFR Traffic Advisories prior to departure. 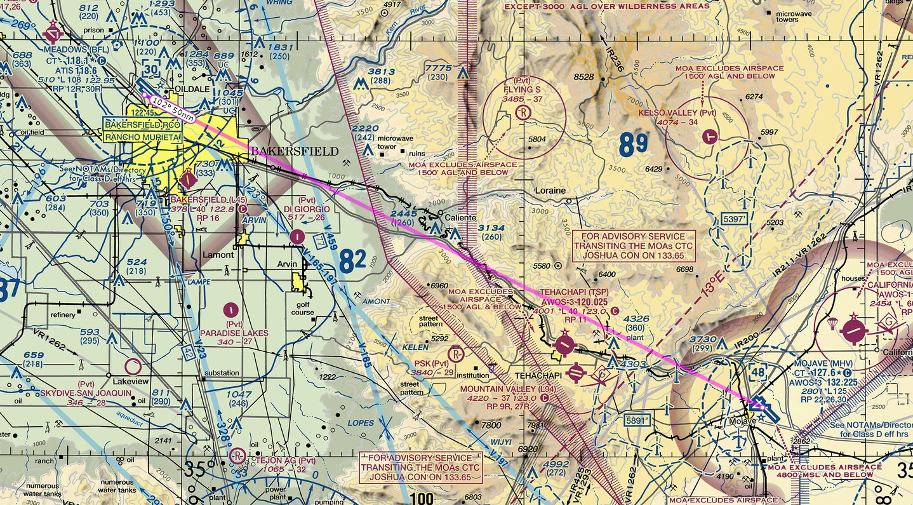 SUA is airspace where specific activities are conducted that need to be contained due to their nature. Normally these activities are military in nature.

The first type of SUA you will encounter during this flight is a Military Operating Area (MOA).

MOAs are used for military training operations. Specifically, air combat tactics, air intercepts, aerobatics, formation training, and low-altitude tactics. MOAs are not always used and can be either active (sometimes referred to as hot), or inactive (cold).

There are no restrictions on VFR flight through a MOA, however it is highly recommended to either avoid active MOAs or obtain advisories when transiting the MOA.

MOAs are depicted on VFR charts in a magenta hashed line and are named. 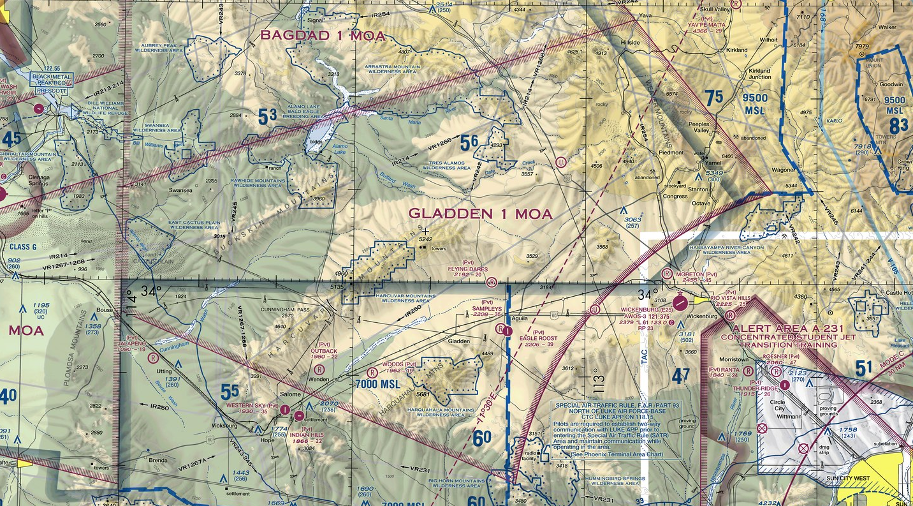 We will be flying within Bakersfield MOA and then the Isabella MOA, More information on MOAs to include altitudes, active times, and controlling agency (ATC facility which can provide information about the MOA) are available on the side bar of VFR charts.

For our flight the Bakersfield MOA starts at 2000’ AGL and ends at 18,000’ MSL (which is the normal ceiling of MOAs). It is only active when a Notice to Airman (NOTAM) is issued.

The Isabella MOA starts at 200’ AGL and ends at 18,000’ MSL. It is active on weekdays from 6 AM to 10 PM Local. The Mojave airport is located within this MOA so there is no way around it for us.

Restricted airspace is depicted on VFR charts in a blue hashed line and are numbered with a number starting after an R. 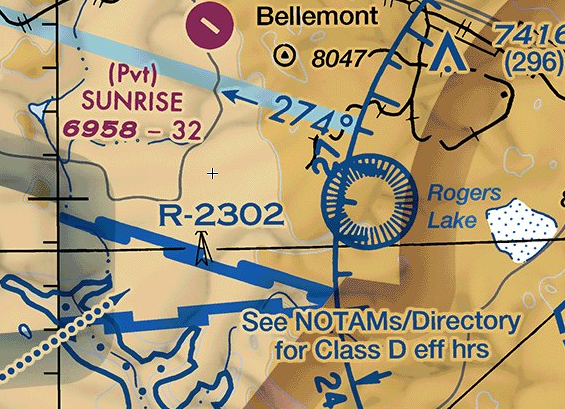 Just east of the Mojave airport is R-2515. R-2515 exists from the surface to unlimited and is always active. Fortunately for our flight we do not need to transit the airspace.

Other Special Use Airspace

There are several other types of special use airspace that we won’t encounter in this flight but should be familiar with.

Clearance delivery will reply with a departure frequency, squawk code, and in certain cases departure instructions.

Read back these instructions, and then contact ground when ready to taxi. NOTE: It is vital to understand that the ‘departure frequency’ refers to the frequency of the controller who will provide flight following once airborne. It is NOT the frequency you should use to call for TAXI. Bakersfield Departure does NOT handle ground movements at Bakersfield Meadows Airport. Not surprisingly, ground movements are handled by the GROUND controller.

At airports without a clearance delivery frequency this call should be done on the ground frequency. You can either combine this request with your taxi request or request flight following prior to taxi.

In either case you will get a departure frequency, squawk code, and possibly departure instructions.

Previous ratings have reviewed flight following services, VFR Departures, and VFR arrivals from Class D services. Below is an example for the radio transmissions involved in requesting flight following while on the ground.