Aug 1 ’22 NOTE: L88 is currently listed as closed to real world operations. The caretakers have secured at $350,000 from the San Simeon fund to resurface the runway, however they are still raising funds to complete other required projects. For the purposes of this rating, the airport will considered to be open. 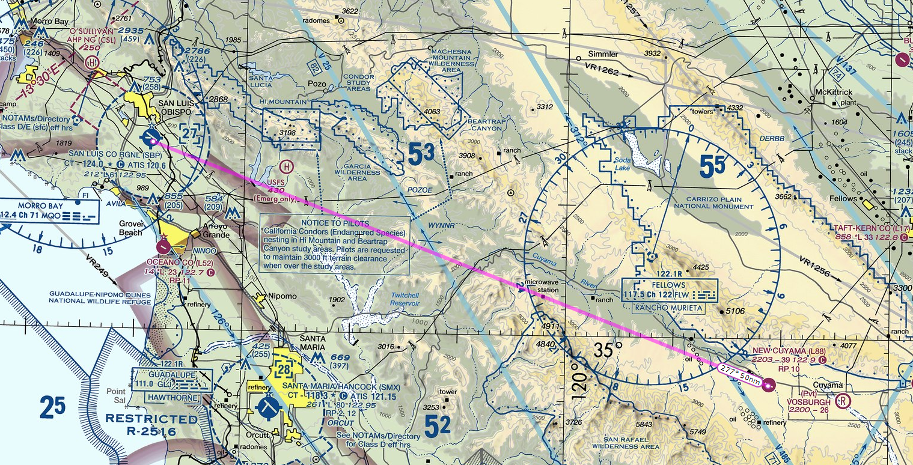 The L88 airport is located within Class G airspace which doesn’t generally impose any requirements on our flight.

En-route between L88 and KSBP you will once again generally be operating in Class E airspace which also doesn’t generally impose any requirements on our flight. 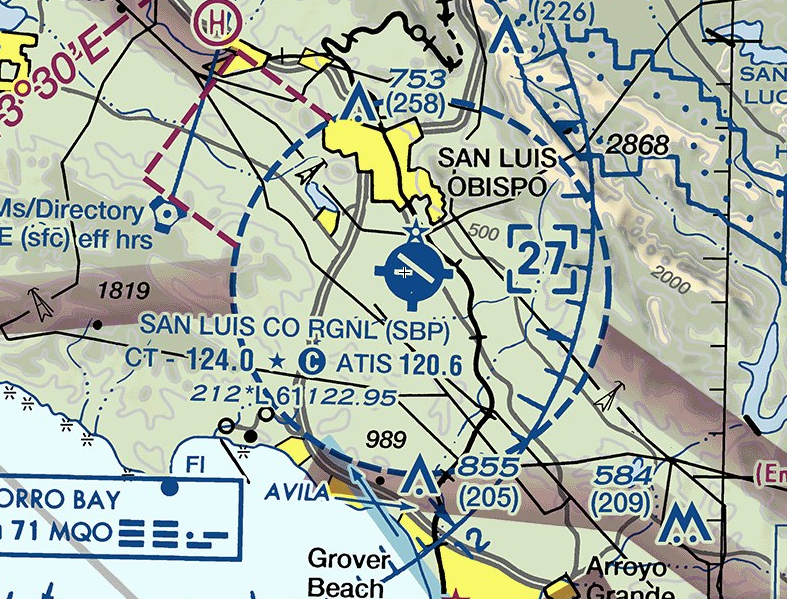 Around KSBP the Class D airspace extends out 4 NM from the airport and goes from the surface to 2700’ MSL.

Prior to entering Class D airspace federal regulations require that pilot’s establish two way radio communication with the tower. The Aeronautical Information Manual recommends doing this no more than 15nm from the field. Be sure to listen on the frequency prior to transmitting to ensure you do not interrupt an existing transaction. In order to establish two way radio communications the pilot must call the tower and the tower must reply using the aircraft’s callsign.

As odd as it might seem, the control tower has used your callsign, so you have established two way radio communication and may enter Class D airspace.

However, if the tower reply was:

Then you have NOT established two way radio communication and may not enter the airspace. Controllers are well aware of this distinction and may intentionally use one versus the other, so be sure to listen closely to their response.

Most control towers also provide ATIS (Automated Terminal Information Service). ATIS is a recorded broadcast which continually transmits weather, NOTAMs and runway information. Pilot’s should listen to the ATIS broadcast prior to contacting the control tower. Each ATIS has a unique letter identifier which should be relayed to the tower on initial contact.

Frequencies to listen to ATIS are available on VFR charts and in the Airport Facility Directory.

In all communications with ATC use the following guidelines:

When initiating contact with a tower use the following format:

Normally the tower will reply with a runway assignment, pattern entry instructions, and in some cases a reporting point.

As with all Air Traffic Control Communications you should comply with the instruction and advise the tower when 2 miles from the airport on a right base. You can keep this instruction short and to the point.

At this time the tower is likely to issue a landing clearance.

After landing exit the runway at the first available taxiway and ensure that the aircraft is past the hold short lines. The tower should either provide taxi instructions or tell you to contact ground control. Do NOT switch to ground control without an instruction to do so. If you have cleared the runway and the tower doesn’t call you with instructions query the tower.

When contacting ground the same transmission format can be used as when making initial contact with the tower, however it is not necessary to repeat the ATIS code.

Previous ratings demonstrated departures from non-towered airports. Here is an example for radio transmissions for an arrival into a Class D airport.

When 10 miles away from San Luis and after obtaining the ATIS.

When on a 2 mile right base.

When clear of the runway.

After switching to ground frequency.