Pilot will fly IFR from KSNA to KAVX and shoot the VOR/DME-B approach from the Santa Catalina (SXC) VOR, filing SLI V21 SXC (for piston and turboprop aircraft) or SXC (for jet aircraft) for the route and an appropriate altitude for their flight.

We’ll use the Avalon VOR/DME-B approach as an example. Consider printing the chart, or opening it in another window so you can follow along.

This assumes you are already familiar with the concept of a feeder route that was introduced in the previous rating.

VOR/DME-B? Which runway would that be?

Approaches are often aligned with specific runways at airports, allowing for ‘straight in’ minimums to be published. In such cases, the descent gradient to the field will be very reasonable, and the final approach course will be aligned within 30 degrees of the runway for which the approach was designed. If EITHER of those two conditions are not met, the approach will NOT have a specfic runway designated in the name, but will instead have a letter, such as A, B, C, etc.

In our case, the VOR/DME-B approach into Avalon is either not aligned with a specific runway, or requires too step a descent to be considered a straight in approach. For this reason, there are no straight-in minimums published for the approach, only CIRCLING minimums. Prior to reaching the missed approach, we will either have the runway environment in sight, or we must execute a missed approach. If the field is in sight, we can descend below the circling minimums, and maneuver (circle) to land on the runway of our choice.

About face! Flying the procedure turn

The previous rating covered a hold in lieu of procedure turn (HILPT). The VOR/DME-B chart doesn’t depict a hold for the course reversal at the IAF (RIGLI). Instead, a procedure turn is used. This provides substantially more flexibility for the pilot. 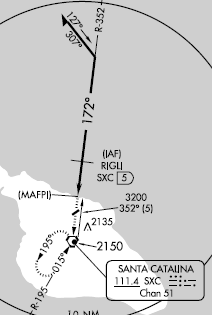 Outbound from RIGLI (heading north) the chart calls for a course reversal to the left. It’s actually legal for the pilot to make the course reversal in any manner he chooses, so long as it is done within 10nm of RIGLI. The amount of space guaranteed to provide terrain separation is slightly higher if the course reversal is performed on the side depicted by the chart, however, so it’s always good practice to fly it as shown.

So, how to fly the procedure turn? Any time after RIGLI, make a left 45 degree turn and proceed outbound for 60 seconds. Make a right 180 degree turn and join the final approach course inbound. That’s it!

With that in mind, let’s fly the approach.

Flying the approach from SXC

Note: The procedure has since been updated to use 3400ft, rather than 3200ft for the Feeder and Initial segments, and 2300 instead of 2100 for the Final segment, but is otherwise identical.

SXC is a feeder for this approach. Assuming we’re on a random route, arriving at AVX from the east and are told the following, “Cross SXC at or above 4000, cleared approach. Report RIGLI inbound”

The first task is to depart SXC hdg 352 and join the SXC R-352 outbound, descending to 3200. The controller might have vectored you south and east of SXC prior to sending you direct SXC, making the the task of intercepting the radial fairly straight forward. Or, you might be arriving via V21, or on a random route after being given direct SXC shortly after talking to Socal, in which case you’ll be arriving from the northeast with a lot of maneuvering to do to join the radial. Either way, start the turn immediately at SXC to join the radial outbound, do not initiate a course reversal using a procedure turn.

Passing SXC 5 DME (RIGLI), we excecute our procedure turn, turning left to heading 307 for 60 seconds. During that outbound leg, set the NAV OBS to the inbound course of 172. After 60 seconds on the 307 hdg, turn right to heading 127 and join the final approach course as the CDI (the needle) on the NAV radio begins to center. Make a right turn to join the final approach course. Once established on the radial inbound, start the descent to 2100ft.

Reaching RIGLI, report the position to ATC as instructed. ATC will likely release you to the advisory frequency, so you can announce your position on the Common Traffic Advisory Frequency (CTAF), to sequence yourself with VFR traffic that may be at the field. Remain at 2100ft until reaching the missed approach point (SXC 2.8 DME), or until the field is in sight, whichever happens first.

Back to our approach, assuming we do have the field in sight, we circle to land on the runway of our choice. If the weather is VFR, then we would make an effort to enter the pattern in a fashion that is compatible with other VFR traffic in the area. Options include entering on a right base for runway 22, or maneuvering west of the field to enter a downwind for runway 22. If the wind conditions are not known, it is possible to cross overhead the field above pattern altitude and then maneuver for the appropriate pattern entry. If the weather is below VFR minimums, then by definition, there shouldn’t be any traffic in the pattern and you can maneuver as needed to become aligned with the runway of your choice.

Once you’ve landed safely on the ground, don’t forget to contact ATC to cancel IFR. That way, they can allow other IFR traffic in or out of the field. Until you cancel, ATC will not allow any other IFR traffic in or out of that non-towered airport. If the weather is good, it’s considered to be courteous to cancel IFR prior to being changed to the advisory frequency by ATC, that way he won’t have to ‘shut down’ the airspace while awaiting your cancellation. When landing at a towered field, ATC manages your IFR cancellation automatically. So, if you hear “cleared to land”, you don’t need to cancel IFR after you’re on the ground.

As we approach SXC, we get the clearance.

We fly the approach and report when we reach RIGLI after the procedure turn.
N132KT: 2KT is RIGLI inbound, looks like the weather is clearing up, cancel IFR

We widen out to the west, continue the descent, then make a left turn to enter RIGHT traffic (as published) for runway 22, Catalina

Then once clear of the runway…

Alternatively, had the field NOT not been in VFR conditions, we would NOT have canceled IFR and instead it might instead have gone like this….

If the field is below VFR minimums, there isn’t going to be VFR traffic at the field. If you’re able to descend in time, you can drop in on the right base for runway 22.

Make the final call and clear of runway calls as before, then call Socal on the previous frequency.

A Practical Guide to Circling Approaches