Fly from KLAX to KSNA and fly a full approach from SLI, without vectors to final. Using our newfound knowledge of TEC routes from the previous ratings, we know that we should file as follows:

Note: the version numbers for the SIDs will change over time.

Where possible, ATC usually provides vectors to the final approach course, culminating in the familiar phrase “5 from the marker, fly hdg 220, maintain 2500 until established, cleared for the Easy Peasy ILS RWY 20R approach,” or something along those lines. There are times, however, when ATC will not provide such vectors, leaving the pilot to navigate themselves from the enroute structure (airways) to the various segments of the approach.

Prior to SLI, you’ll be cleared for the ILS RWY 20R approach and will be expected to fly the FULL approach as published. This is the same approach as the one used in the I-1 rating, however, this time, you will not be vectored to the final approach course by ATC.

There are 4 radials identified out of SLI. Which one should you fly? All of this, and a lot more is covered below in more detail than one would think was possible.Or, if you prefer, it’s all available in video workshop form at the bottom of the page in the Related Materials section. Take your time, this is a crucial skill for IFR flying.

The altitude assignment in the IFR clearance from LAX will likely contain, “climb via SID except maintain 4000” (or 5000 for turboprops/jets).

The ‘climb via SID, except maintain…’ instruction implies that the SID has published crossing restrictions. Review the SLI SID and notice there is an ‘at or below 3000’ restriction based on the SMO crossing radial.

This means you would takeoff and remain below 3000 until crossing the radial, then continue the climb to the assigned altitude. An exception to this would be if you receive an amended altitude from ATC (such as the Socal Departure controller after checking in with them). So, if Socal says, “radar contact, climb and maintain 4000” then the 3000ft restriction is removed.

Secondly, pilots are required to advise ATC when they are climbing via a SID when making initial contact with the controller. So, all of these other candidate calls are incorrect:

The correct call would be: “1500 climbing via SID except maintaining [4000/5000]” depending on the actual altitude assignment.

Fun fact: the 3000ft restriction is there to provide separation with the VFR aircraft ploughing through the Bravo at 3500 in the Special Flight Rules Area without any communication with ATC.

Being vectored to the final approach course is certainly the most common way to be cleared for a precision instrument approach (eg. ILS). There are a number of cases, however, where vectors cannot be provided, and the pilot is expected to fly the ‘full approach’.

Instead of being vectored to final, ATC will clear an aircraft for the approach. It the aircraft is on a random route (ie, not on a published airway), ATC must include an altitude to maintain until established on a segment of the approach. Otherwise, if established on an airway, no altitude needs to be given in the clearance and the pilot may descend to the MEA for that segment at their discretion.

Let’s take a close look at the ILS RWY 20R approach at John Wayne (KSNA) and find out exactly how to fly the full approach in absence of being vectored to the final approach course. Incidentally, one benefit of becoming proficient at flying full approaches is that you can safely execute these approaches without ATC assistance, even practicing them offline if you wish.

ATC can clear you for an approach if you are established on a route that will overfly an Initial Approach Fix (IAF). Many IFR flights take place within the low enroute structure on Victor airways. IAF’s are most often not located on these airways, so the question becomes, in absence of being vectored to the IAF, how do you safely transition from airways to the IAF?

Specially charted instrument approach segments called feeders have been developed for precisely this case. They lead from the enroute structure to an IAF, providing terrain separation and navigation reception, much like an airway, except considerably shorter. They are found on instrument approach charts, such as our ILS RWY 20R chart for KSNA.

SLI is a feeder on our approach plate. This means that if your route of flight (either what you originally filed, or as a result of a route amendment in the air) has you going SLI, then ATC can say “cross SLI at or above xxxx, cleared approach”, and you’re on your own from that point on.

How do we know that SLI is a feeder? It has a route segment length and minimum enroute altitude depicted. For SLI, it’s 18.9nm at or above 4000ft to SAGER. 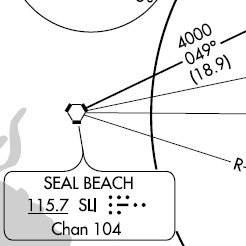 We now find ourselves approaching SAGER, the IAF. Now what?

Course reversal? You gotta know when to hold ’em.

Since many pilots are used to receiving vectors to final, they have learned to ignore the published holds, and often wonder why they’re having difficulty flying a full approach.

The purpose of the course reversal (be it a hold, or a procedure turn) is to align the aircraft with the approach and/or to descend an aircraft down to a more reasonable altitude for the approach while remaining clear of terrain.

Flying the approach from SLI

We’ve dealt with high level terms about how to read the chart, and when we do or do not need to fly a course reversal. Let’s now deal with the specifics of how to efficiently fly this approach. Let’s assume we’re direct SLI, approaching from the west and we receive our approach clearance, “cross SLI at or above 4000, cleared ILS RWY 20R approach, report SAGER inbound.”

Departing SLI, we fly heading 049 (as depicted on the chart), tracking towards SAGER. Thinking ahead, we see we’ll need to join the I-SNA localizer outbound, so on the other NAV radio, we set the freq to 111.75. Over SAGER, we make a left turn to heading 014 and join the localizer outbound.

Approaching SAGER, we need to fly the HILPT. This will be a parallel hold entry, so we continue outbound on the localizer for 1 minute past SAGER, then initiate a left 225 degree turn (180 + 45) then join the localizer inbound again. We can descend to 3500 in the hold entry, as depicted on the bottom of the chart.

With the HILPT completed, we’re now coming up on SAGER, inbound on the approach, and we’ve flown the hold entry. Notice we haven’t flown a full lap of the hold. It is not required, as the goal of this procedure is to have us become established on the final approach course, which we have now done. See the I-6 video (bottom of page) for a visual depiction of how to fly the hold.

Quick aside, you might wonder why the depicted hold at SAGER shows RIGHT turns, whereas we primarily made left turns during the course of the parallel hold entry. This is because the hold serves two different purposes:

1) It is a “hold in lieu of a procedure turn”, which facilitates the course reversal necessary to complete the procedure when arriving over SAGER from awkward angles (such as SLI R-049).

2) It serves as a holding point if ATC needs to essentially park airplanes over SAGER as they await their turn for the approach. This would typically only be done in a non-radar environment. Since KSNA is a radar facility, they can have multiple aircraft conducting the approach at the same time, so this point is somewhat academic at KSNA in terms of daily operations.

The course that is depicted is for the full holding pattern (case #2). In our case, we used it for case #1, just to turn the boat around. When we finish the course reversal, we’re approaching SAGER, inbound. Think about it, a full lap of the hold from that point would add precisely no value. It would have us arriving, 4 minutes later, over the same point, at the same altitude.

We report to ATC, “SAGER, inbound.”

Continue on the localizer towards SNAKE. We formally intercept the glideslope at LEMON and begin our descent to decision height. Alternatively, priot to LEMON, we can track the glideslope so long as we comply with the minimum altitudes at SNAKE and BONKE. The lightning bolt depicts the minimum glideslope intercept altitude. Reaching 255’, the decision height for this precision approach, we must either have the runway environment in sight, or execute the missed approach procedure.

Flying it without a glideslope, the LOC RWY 20R approach

If we were unable to receive the glideslope, or if it was out of service, we would execute a localizer only approach from SAGER. Cross SNAKE at or above 3400, BONKE at or above 2800, LEMON at or above 2200, DYERS (I-SNA 4.1 DME) at or above 1040 and then maintain 440’ until the field is in sight and we have passed the Visual Descent Point at 2.2DME if we’re able to identify that point. If the runway environment isn’t in sight upon reaching the missed approach point, we execute the missed approach.

In lieu of any other climb instructions, we must follow the published restrictions on the SID, which says to cross SMO R-154 at or below 3000, then turn left hdg 200 for further vectors and continue the climb to 4000.

SNA_APP: Piper 2KT, cross SLI at 4000, cleared ILS Runway 20R approach, report SAGER inbound, and how will this approach terminate? (since we’re practicing a procedure, the controller wants to know if this is going to end with a missed approach in case he wants to relay missed instructions other than the published missed).

Keeping our speed up to the extent possible, we reach LEMON and call the tower…

Swapping to ground after crossing 20L…